Dale Wayne Sigler goes into a subway shoots John William Zeltner Jr. 6 times. Then he robs Subway of $400. He also knew John Zeltner. He was was sentenced to death, but Texas had changes to its laws about jury selection. Then he was sentenced to life. Under Texas law since he has served 30 years it made him eligible for parole. And he was paroled… he also felt as if he had done his time for heinously killing another human being. During the time while he was in prison he was penpals with Carole an older woman. She visits him and they develop a bond. When he is paroled she picks him up and he is living with her. After he is paroled it follows him attempting to just to life now. He shows him trying to get a job, going to church, and getting frustrated with technology. They also speak with John Zelter’s family, they feel as if he should not be out, which is understandable feeling. 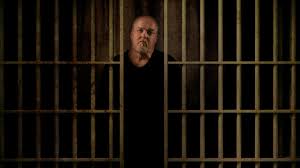 He keeps hinting that he has a secret. He finally divulges the secret. He is now saying that his intent wasn’t to rob the subway. He says that in his past he was molested at 10 years old, then doing different types of drugs and living on the streets. He met John and he started living with him to get off of the streets. John was gay, he says that one night John is on top of him trying to get things to go the sexual route. He says that John attempts to blackmail him into a relationship and if he didn’t he would tell everyone that he was in a relationship with him. Dale says he gets angry and tells him that he was not going to ruin his reputation because that is all he had left, that he was extremely angry and for him not to do that anymore cause he would kill him. He says this was his motive for killing him… Okay but why did he take the $400 and brag to all his friends about what he had done. Killing John due to that does not justify it. He is using religion as a weapon. Many Christians feel that being homosexual is an abomination. So when Dale goes to church with his “new story” and gives the church his testimony, they stand up and applaud him. But real Christians would tell him all life has value, they are suppose to teach and spread love. If they interpret the bible as God saying it is an abomination, it is not for us to judge. God says for us to love everyone that is our job. He is the one that does the judging. I believe he thought by changing his story that people would not look at him for the monster that he is. He thinks he should be able to get out of jail and his life should go back to normal. Since what he has done was giving him roadblocks he thought this lie would make it easier for society to accept him. In prison he said that he found God and is a minister. But I do not know what God he has found. He believes him murdering him is less sinful than John being gay.

He is not taking responsibility for what he has done, he has not learned anything, he feels as if he should be out of prison. He shot that man 6 times and sent him to meet Jesus, but doesn’t think he is a monster. You gruesomely takes someone life and think you do not deserve death? Life in prison? If he can not take responsibility for his actions how is he going to be reformed? He has attempted to make himself a victim.

I am not saying that people can not be reformed, I am saying he has not learned his lesson, he is not reformed. He should still be behind bars.